From the Ashes of the Empire

With the death of Emperor Palpatine and destruction of the second Death Star over Endor, the Rebel Alliance has secured an almost assured victory over the Imperial remnants and sparked revolutions throughout the Galaxy. Captain Sage Tymon and his surviving crew of three exceptional misfits were picked up off the forest moon of Endor and returned to Sage’s SoroSuub Luxury 5000 Space Yacht, The Gryphon, by Rath Sunrider and the crew of The Smoking Blaster.

Admiral Ackbar put Sage and his team in for promotions and medals for their actions on behalf of the Rebel Alliance at Endor. Although Sage is planning on retiring from active service, he now holds the rank of Major. There are boundless oppurtunities in the post-war Galaxy for anyone who can capitalize on them…

Tales of the Gryphon Flambeaux1369 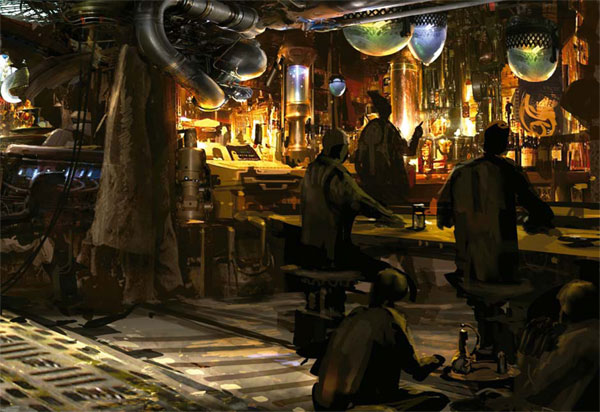 Tales of the Gryphon Comments

Pomojema was a minor god who was worshiped by natives of Mimban as a healer-god, before the planet’s mining settlements grew culturally disruptive. He was believed to have a humanoid body, wings, and a face of tentacles similar to that of a Khil. Priests of the Temple of Pomojema used a Kaiburr crystal to amplify their Force powers.

The legendary Kaiburr crystal is located deep in the jungle within the Temple of Pomojema. The powerful crystal rested within a ceremonial statue of the minor local god, Pomojema.

The Kaiburr crystal was initially used by priests to heal the sick in the Temple of Pomojema. However, for reasons unknown, the area was abandoned, and the crystal became a legend in the eyes of the local Mimbanites. The crystal would go on as a legend until around 2 ABY, when an elder woman named Halla purchased from one of the Mimbanites a shard of the crystal, as well as a map which led to Pomojema’s temple. The woman went on an expedition to acquire the ancient relic. No more is known of her fate.

The crystal was known to have existed as early as 3,951 BBY. Due to its mysterious nature, several myths were formulated to explain the origins and usage of the Kaiburr crystal. One was formulated by the residents of Circarpous V, a planet locally known as Mimban, who began attaching the crystal to one of their legends. These legends stated that the crystal was created by Pomojema, a third-rate local god described and known as the god of the Kaiburr. In his temple, his priests would bolster their healing powers to aid the sick with the Kaiburr crystal. The crystal was reputed to be held by a stone statue of Pomojema inside the large temple ziggurat, and guarded by a Hssiss.

A week after the Battle of Endor in 4 ABY, Alliance pilots from Rogue Squadron, as well as Ten Numb and Han Solo, were ambushed by Imperial forces on Corellia. A large number of Imperials streamed into the planet following the death of Palpatine, giving new power to pro-Imperial factions on the world. A large Imperial fleet was soon sent by the Imperial Ruling Council to defend the world and its shipyards, including forces from Ord Mirit.

Six months after Endor, this fleet was one of the most powerful concentrations of Imperial might anywhere in the Core Worlds, consisting of twenty-five Imperial Star Destroyers under Admiral Jaeff—by comparison, Kuat had just fifteen Star Destroyers, and Corellia’s defenses were scheduled to be even more heavily reinforced when Admiral Roek arrived to assume overall command, with the Super Star Destroyer Aggressor and five more Imperial-class ships

Had a very eventful session today. It started with the Revolution kicking off in Darlyn Boda city. Rath was meditating and missed the fighting while Sage took off to Sol Negro.

As Sage was landing he encountered Jack and the Gryphon took a couple substantial hits. Blue (Rex) roused Rath and he managed to set The Gryphon down in the street without damage while Black Jack’s set of five Skipray Blastboats took out Jack.

Black Jack agreed to have the Gryphon repaired and gave Sage a million credits for 100 kilograms of pharmaceutical grade Kymeranth (an opiate painkiller).

Doctor Dave got a job in the hospital for 100 credits a day working on wounded syndicate enforcers.

Sage gave Rath, Jarael, and Jade 15 thousand credits and the use of his Ronto speeder truck to get some top of the line instruments. They took Blue and Mithril with them and Rath drove the group back to Darlyn Boda City where the revolution was still going on.

Rath drove past several looters and the CMG tower on the way to the heart of the fighting and could see both sides were well entrenched. Rath gave Blue permission to shoot any looters he spotted with sleep darts and tried to locate the leader of the revolution.

The Leader was a Sullustan who was back at the CMG tower so Rath drove back down the main boulevard waving to an AT-AT as he passed without being fired upon (might have thought he was a tourist) and made it back to the CMG where about 140 revolutionaries were hanging out and getting drunk while the leader proclaimed victory.

Rath scanned the mind of the leader and found he was sincere although not perfect and tried to get him to join his troops in the assault. Failing at the attempt Rath tried to tempt the soldiers away from the tank, but made the incorrect assumption that they were attracted to women. Finally Blue rolled over and set off a massive stun charge giving Rath, Jarael, and Jade access to the military vehicles unchallenged.

Mithril took the Ronto back to Sol Negro while Rath, Jade, and Jarael charged up to the battle (Very, Very Slowly). Rath discovered to his dissapointment that the repulsor-tank topped out at 50 KPH (31 mph). Blue engaged the AT-AT with the tank’s main gun and destroyed it.

Hoping to join the battle sooner Rath pushed the engines and they blew out. Hoping to salvage something Rath attempted to push the tank with the force, and managed to muster 12 KPH (7.5 mph) before giving up and focusing his force abilities back on the engines to get them going. Back up to 31 mph Rath followed by Jarael and Jade eventually made it to the battle.

The engines completely spent the tank dropped and Jade and Jarael hopped out of their Ulav’s so the revolutionaries could use them for fire support. Donning a full body pink flamingo costume Rath emerged from the Tank with a pink lightsaber loaned to him by Blue.

Sprinkling pixie dust (pink glitter) on Jarael’s lightsaber Ruzovy Plamenak (Rath) lead her on an attack dance. Sprinkling pixie dust on the troops as he passed and dancing the Flamenco while deflecting blaster bolts with pink lightsaber Ruzovy started towards the governor’s mansion through the line of fire from both sides. Jarael followed, but chose to walk rather than dance with her double lightsaber twirling around to deflect blaster bolts even sending some back at the AT-STs guarding the garrison base. Jade used the distractions to sneak past everyone while Blue just rolled past like any other droid.

As Ruzovy moved up to the mansion a stormtrooper turned to shoot but was sprinkled in pixie dust as his gun was cut in half by the pink lightsaber. Jarael went around the other end of a speeder limo and two stormtroopers turned to her and she deflected their bolts into the limo hitting the reactor and causing it to explode taking out the rest of the unit. Jade managed to sneak through the mansion and snagged a statuette that had some Jedi significance.

Jarael and Ruzovy jumped up to the shuttle pad and found two Stormtroopers guarding the shuttle, two more loading treasure, and an entourage crossing the bridge. The entourage was made up of eight stormtroopers escorting the governor, his mistress, and Lieutenant Smeed. Behind them was Jade exiting the mansion.

Jarael made for the shuttle and managed to deflect a blaster bolt back into one stormtrooper guarding the shuttle but as Ruzovy danced in front of her she deflected the other bolt at him, although he deflected it harmlessly away. Ruzovy threw a handfull of pixie dust towards the bridge and it seemed to transform into a sheet of pink marbles on the bridge (Illusion).

The eight stormtroopers on the bridge took up firing positions to shoot at Ruzovy, but before they got the chance Jade opened up from behind them with her DL-44 (Han Solo blaster) and after a few shots hit a thermal detonator one was wearing and blew up the bridge.

Ruzovy and Jarael intimidated the other Stormtroopers into retreating and Jade went to jump the destroyed bridge. Jade’s boots cut out leaving her falling, but just before she hit the ground the repulsors kicked back in and she flew back up to the shuttle. Blue flew up behind her and the group took the shuttle and fled as guns from both sides took parting shots at them.

Potential crewmembers will essentially work passage. This would allow Sage to avoid paying crew fees and the crew to avoid paying passage fees, provided they contribute some valuable service to the ship and crew. Every port can be an oppurtunity. Individual’s skills can bring them a profit while planetside. If they work as a team, they can expect a share of group profits. It is Sage’s ship, so if somebody doesn’t work out he can drop them at the next port.

There are only so many luxury cabins and crew cabins, although people can set up residence in other parts of the ship if they don’t want to end up sharing a room (and bed). Final say is up to the ship captain. Cots in the cargo bay are an option. Wealthy, noble and influential characters will want appropriate accomodations.

The Gryphon could become similar to the paddlewheel riverboats of the old west. Traveling casino and entertainment center.

I'm sorry, but we no longer support this web browser. Please upgrade your browser or install Chrome or Firefox to enjoy the full functionality of this site.